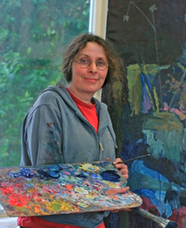 Martha lives and works in the Dutch town Rockanje (Zuid-Holland province). The artists Jan R. Hofman (Martha's father) and Poppe Damave have taught her the principles of visual arts. Subsequently, she followed a traditional training in oil painting with the painter Jan Grunstra (student of Henri F. Boot), based in Haarlem. In the years after that, she developed further as an autodidact.

One of Martha's specialties is the depiction of Jewish religious scenes. From her early years, she has been interested in Judaism. During five study trips to Israel, she deepened her knowledge on this theme. She regularly gives presentations about Jewish religious life with reference to her works.

Martha's work has been exhibited in Amsterdam, Haarlem, Hoofddorp, Maassluis, Brielel, Hellevoetsluis, Rockanje, Rozenburg, Middelburg and Nijkerk, and more places. For more information about coming exhibitions, you can follow her news blog on this website.

You are also warmly welcomed in her studio MarthArt to see her works there and discuss them. As much as Martha is an interesting artist, she is a very exciting storyteller as well.
Powered by